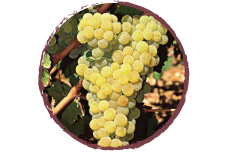 The richness of indigenous varieties of Greece is inexhaustible, although many of these varieties are or were threatened with extinction. A remarkable example of this kind is the Cretan variety Plyto which survived from the verge of disappearance and is currently responsible for a small number of white wines. However, the potential of Plyto variety promises that it will develop into one of the main indigenous ones that in future will become the representative of the modern wine profile of the historic island of Crete. Although only a few plantings with Plyto are found in eastern
Crete, the Heraklion producers were the ones who undertook to bring it back to attention, discovering, isolating and planting again Plyto in the region.
The irrigation of the modern Heraklion vineyards not only faces the dislike of this rare grape to drought, but it also helps it to bring out its lemon character and its full of freshness presence. Thus, either alone or blended with stronger and more mature varieties like Vidiano, it seems able of exceptional performances. Also, the producers of the local vineyards are so excited about Plyto, that they are already attempting the first «single vineyard» bottlings – initially on an experimental level! Although it will take time for the anxious producers to discover every aspect of its capabilities, the Plyto shows that it will become one more weapon in the arsenal of modern Greek wines, but also another treasure for wine explorers.